An exceptional case is that of a small planet, Mercury, which nevertheless has high density and consequently a disproportionately large core. This can be attributed to its position as the planet closest to the Sun. As a result, it must have the lowest oxygen concentration and the thinnest silicate oxide shell. If the shell is too thin to maintain the thermal insulation of the interior, the planet's resultant rate of evolution should be very slow, and it should be able to retain its hydride core for a long time. This behavior results because the planetary heat is consumed so efficiently that overheating of the interior does not exceed the critical temperatures of hydride stabilities.

Magnesium silicide, Mg2Si, is dark-blue or slightly purple in color. According to the Hydridic Earth concept, this is the predominant (main) phase of inner planets’ mantles.

Because Mercury's crust is very thin, large meteorites can penetrate it and reach the mantle, which results in some of the mantle’s substance being ejected onto the surface of the planet. This consists primarily of magnesium silicide, which we see in the photographs. 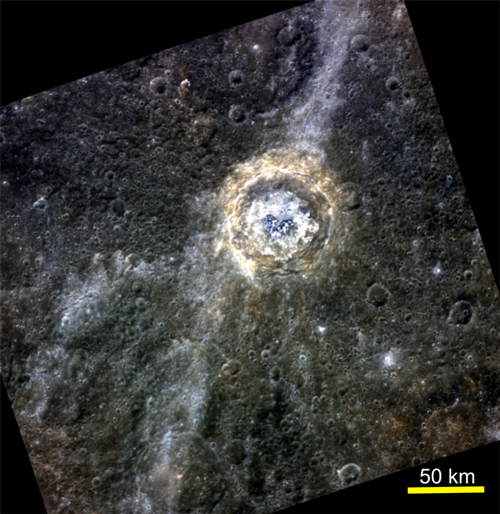 In such case, how the blue "pyramid" in the center of the crater is formed?

The lack of lithospheric thermal insulation and high thermal conductivity of metals in mantle allows free dissipation of radiogenic heat. Over time, due to the consumption of uranium, thorium and potassium-40, there would be a decrease of radiogenic heat generation and, consequently, a gradual cooling of the inner zones of the planet. With a decrease of temperature taking place, the reactions of hydride formation with hydrogen occluded in metals become possible. These reactions results in a decrease in the volume of the mantle’s material. Accordingly, the volume of the planet and its radius will decrease (what was proven by recent discoveries) and the pressure in the interior will increase. In such case, blue magnesium silicide (plasticized by hydrogen, see details in the book) is forced up the throats of impact craters onto the surface - just like toothpaste from a tube. 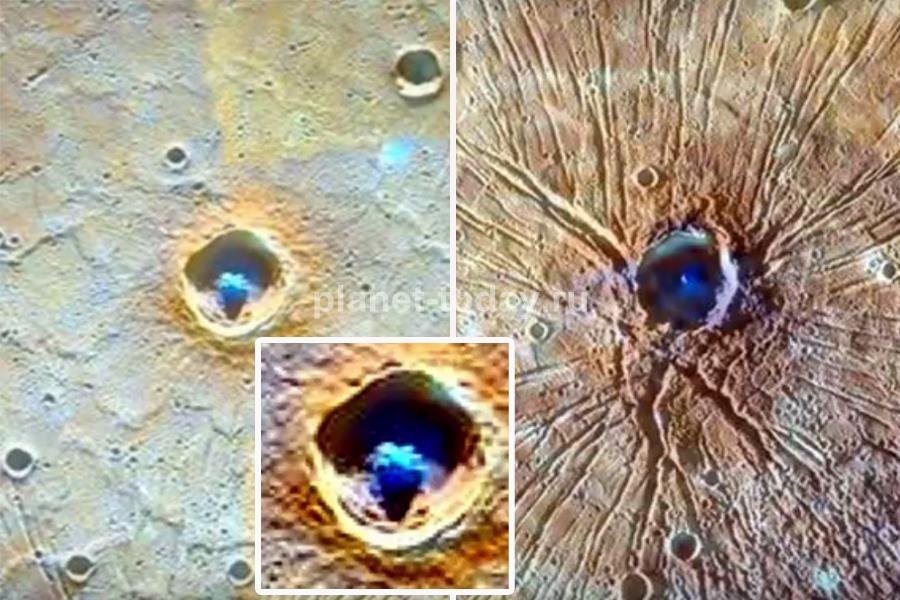 Pictures of craters on Mercury. Colors are intentionally enhanced. On the left is crater Cunningham (37 km in diameter) and zoom on it. On the right is crater Apollodorus with its Pantheon Fossae. Original image on NASA’s website.