We detected abnormally high hydrogen concentration in the subsoil air in European Russia. Studies have shown that this phenomenon is caused by the release of hydrogen streams from the bowels of the planet.
Typical "ring-shaped structures of subsidence" with diameters ranging from 100 m to several kilometers are formed near the outlets of hydrogen streams.
Previously our work was held on the Russian platform. However, according to the satellite photos similar structures can be found on all continents. They are especially widespread on the U.S. east coast (the so-called "Carolina Bays"). Americans had discovered these structures in the 1930-ies. They have been studying them carefully for decades, but the real cause of the formation of these structures remained unknown. In our opinion the cause is the same – hydrogen stream degassing from the bowels of the planet.

We have perfected a method enabling to detect deep hydrogen streams, and we can conduct researches in the U.S.
Confirmation of our assumptions about the genesis of the "Carolina Bays" structures would enable us to talk about the global nature of hydrogen degassing. The consequences of this phenomenon for the human community can be both positive and negative (up to thermobaric explosions on the surface of the planet). And if it is a new, previously unknown phenomenon of global character, it must be taken into consideration in many aspects of human activity.
For example, in the chemical composition of oil and gas one carbon atom corresponds to 2.5-4 hydrogen atoms, whereas in the organic remains of sedimentary rocks there is no more than a hydrogen atom per carbon atom. In this regard, it is obvious that the problem of hydrocarbons’ origin is primarily the problem of hydrogen source.
In the light of hydrogen degassing it becomes clear why oil doesn’t run out in some fields, where the extracted volume is several times greater than the estimated. Or why 10-15 years after becoming completely exhausted some fields are partially renewed. And why there are huge oil fields in the ancient Precambrian granite-gneiss of original magma genesis, which never contained mother bed of oil, but contained carbon-containing minerals.
Our discovery of hydrogen degassing will probably force to revise the estimations of the planet’s oil and gas deposits.
Perspectives associated with shale gas production are widely discussed. Shale gas is methane, not clustered in porous rocks but dispersed in dense shales. Its concentration is low, but the volume of shales is enormous, and the Americans learned to extract this methane efficiently. As a result, the U.S. came in first place in the world in natural gas production on its own territory and has no need to purchase liquefied natural gas (LNG) from Arab countries. This LNG got to Europe, the supply sharply exceeded the demand, and natural gas prices plummeted.
Gas suppliers tend to believe that shale gas will run out soon, and that the “shale gas fuss” is nothing but a PR-campaign for alternative energy sources. American experts hope to achieve complete energy independence in 15-20 years.
Who is right? Neither is. But if gas suppliers are sadly mistaken not to their advantage, the Americans are wrong because of the underestimation of their luck. American experts believe that methane was formed within the shales when they were in form of silt clay where organics rotted, similarly to the modern process of methane formation in swaps. Americans make an assumption (in fact, an unbelievable one) that methane retained in the sediments, despite the fact that the silt clay turned into bituminous shale, while it was heated up, weighed upon, dried and creased up during many millions of years . According to this version there should be just as much shale gas as shales can accumulate. The shales are dense, so there is no porosity enabling methane to migrate spontaneously to the drilled hole. Therefore, gas extraction is conducted in the area of fissuring caused by hydraulic fracturing. After the exhaustion of this area new volume has to be drilled out and fissuring has to be provided. That is a very expensive method and yet it is economically profitable because the gas is extracted in the same place where it is consumed (there are no shipping expenses).
In light of hydrogen degassing of the planet methane is currently formed within the shales because of the reaction of its carbon-containing organics and deep hydrogen. Accordingly, there is no reason to expect imminent exhaustion of shale gas. It will be formed for as long as deep hydrogen degassing goes on, so this process will, apparently, last for thousands of years. Many countries are going to duplicate the success of the United States producing shale gas within their territories. Needless to say, what the gas suppliers should expect in the near future.

A few pictures to illustrate the extent of possible hydrogen degassing in the U.S. 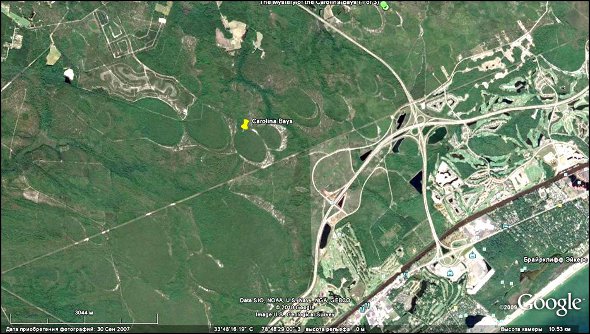 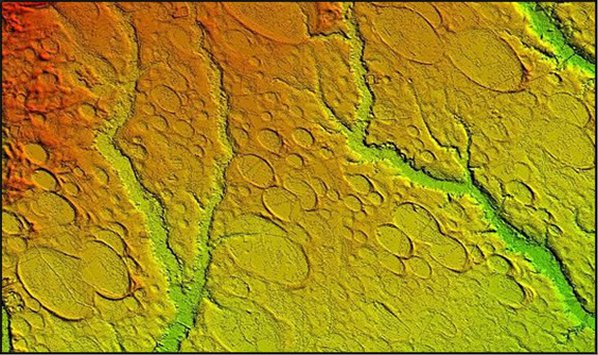 "Carolina Bays" structures. In this image the contrast of the relief is intentionally increased. The long axis of the largest oval on this picture is 1.2-1,3 km, but there are some with long axes up to 8 km. 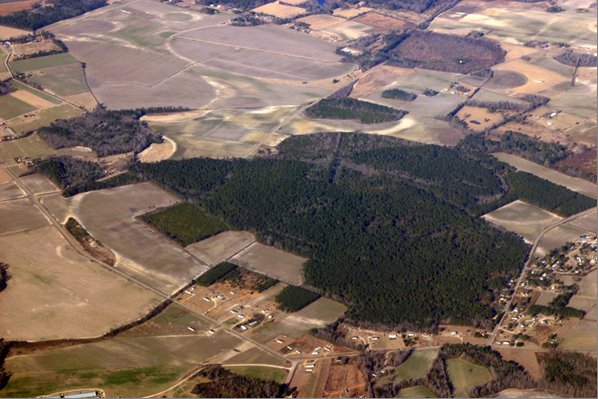 This picture shows that life in the area of intensive hydrogen degassing is possible. 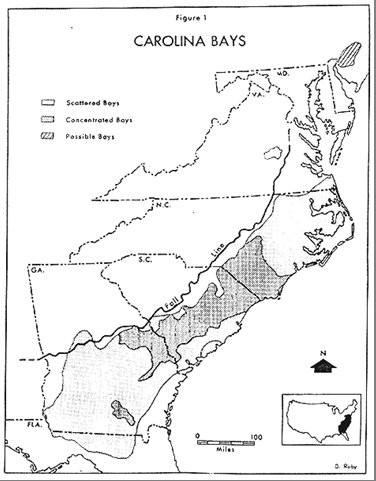 This picture shows the territory of "Carolina Bays" structures localization. 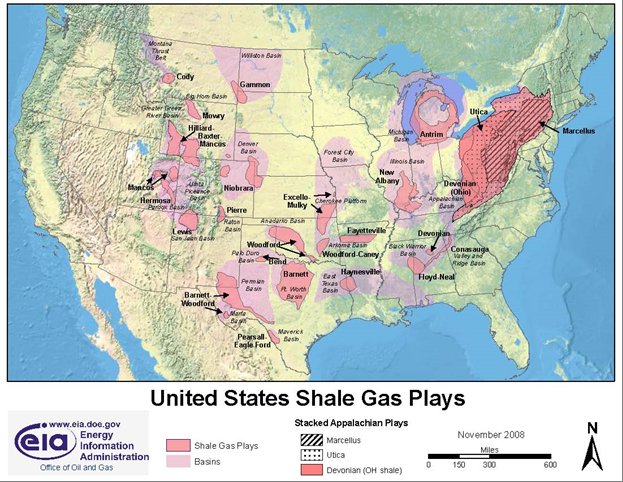 The shape of a hydrogen degassing structure is determined by the form of its hydrogen stream. If a hydrogen stream works its way within an isotropic medium, then an isometric (up to perfectly circular) depression is formed. If the medium has tectonic breaches, then the hydrogen rising from the depths will tend to fill this "breach" as a medium of the least resistance. In this case, the form of the channel and its depression on the surface can be quite unusual. The figure shows the fragments of satellite imagery (Landsat) of central Bolivia and northern Yakutia (Sakha), Russia. Concerning Carolina Bays, we believe that in this region the directions of the ellipses’ principal axes coincide with the strike of transform faults of the Atlantic Ocean. 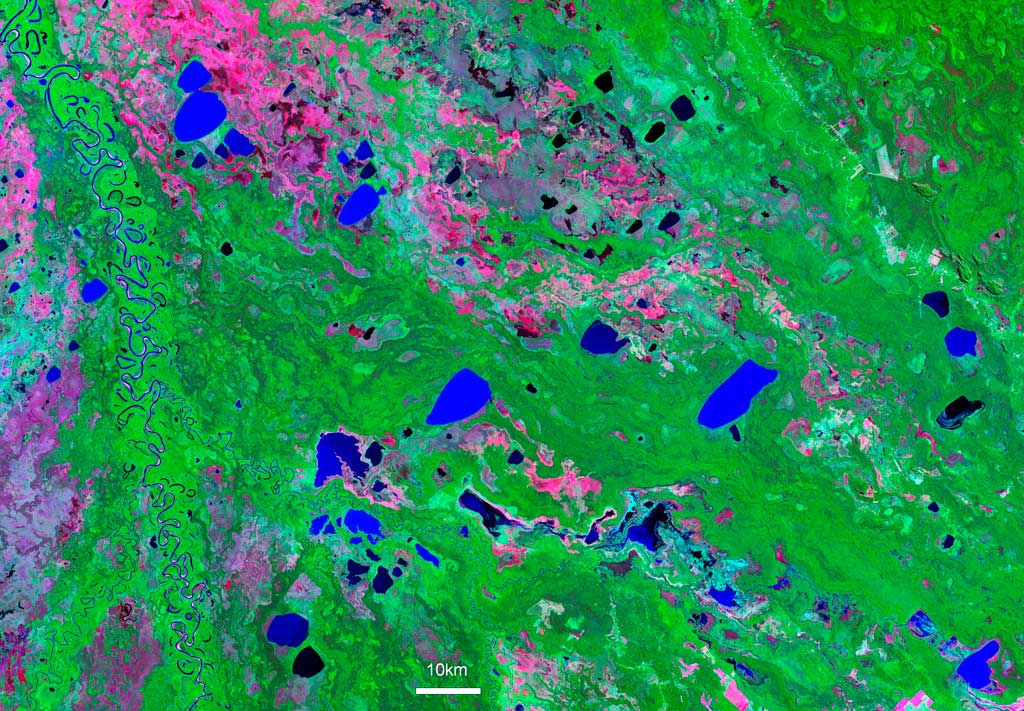