Since ever, the human race had been curious about its planet composition and structure. The earliest signs of this process come back as far as to the Stone Age.

In 1930s Acad. Vladimir I. Vernadsky was the first scientist to suggest that Hydrogen had played a fundamental role in chemical processes taking place within our planet internals – and the entire Solar System as well.

In 1950s astronomer Fred Hoyle suggested that at the time of the Solar System formation, the matter was in the form of plasma. It formed a rotating disk having its own magnetic field.

In 1968 for the first time in history of science, the Soviet scientist Vladimir N. Larin determined the patterns of chemical elements’ distribution in the Solar System.

Upon analyzing the results of chemical elements’ distribution across the Solar system, Dr. Larin concluded that it had proved to have been dependant on their ionization potentials values. Therefore, the matter was spread around the Solar system based on its ability to pass through the magnetic field of the Proto-Sun. Based on this assumption, the elements with lower ionization potentials (IP) remained closer to the system center, while those with higher IP would have to be spread farther, without being caught by electric magnetic “screen”.

It’s quite remarkable that with the new concept development, the paradoxes of modern geology accumulated through centuries have been resolved. Dr. Larin published 5 books and dozens of articles describing the new hypothesis particulars. All scientific predictions made by Dr. Larin have been confirmed. 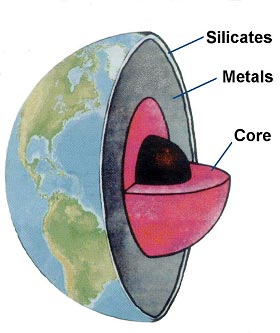 One of the most valuable consequences from Dr. Larin’s concept is the suggestion that below the Earth crust and mantle, our planet is formed by Oxygen-free material and Si, Mg, and Fe-based alloys. 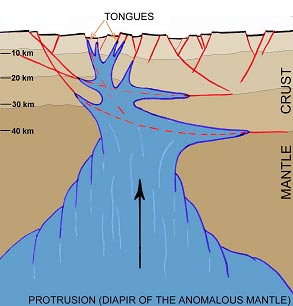 However, there are areas on Earth where the crust is very thin and the mantle material tongues a.k.a. diapirs approach the day surface very close.

In early 1970s, Dr. Larin’s postulates have been enthusiastically supported by the Soviet astrophysicist Dr. Joseph S. Schklovsky, then Associate Member of the Soviet Academy of Science. He reviewed the summary of what Dr. Larin had done to that moment, and confirmed the concept compliance with basic laws of astronomy and physics.

The extensive experimental stage followed in mid 1970s – early 1980s. Under Dr. Larin’s supervision, a number of Soviet scientific research institutes got involved in this process:

The feasibility study was performed by the Siberian section of the Russian Academy of Science. According to this study, it is feasible to produce 100 - 200 million metric tons of oil equivalent (about 700 - 1400 Mboe) from 10 sq. km of the "tongue" surface (about 3.8 sq. miles). In 1989, the decision was made by the Presidium of the Academy of Science of the USSR to establish the scientific entity and to perform appraisal drilling in Tunkin Depression zone (East Siberia, Irkutsk Region, Baikal Lake area). However, this project has never been implemented because of a number of political and economical reasons (collapse of the Soviet Union followed by economy decline resulting in fundamental science projects’ low priority etc.)